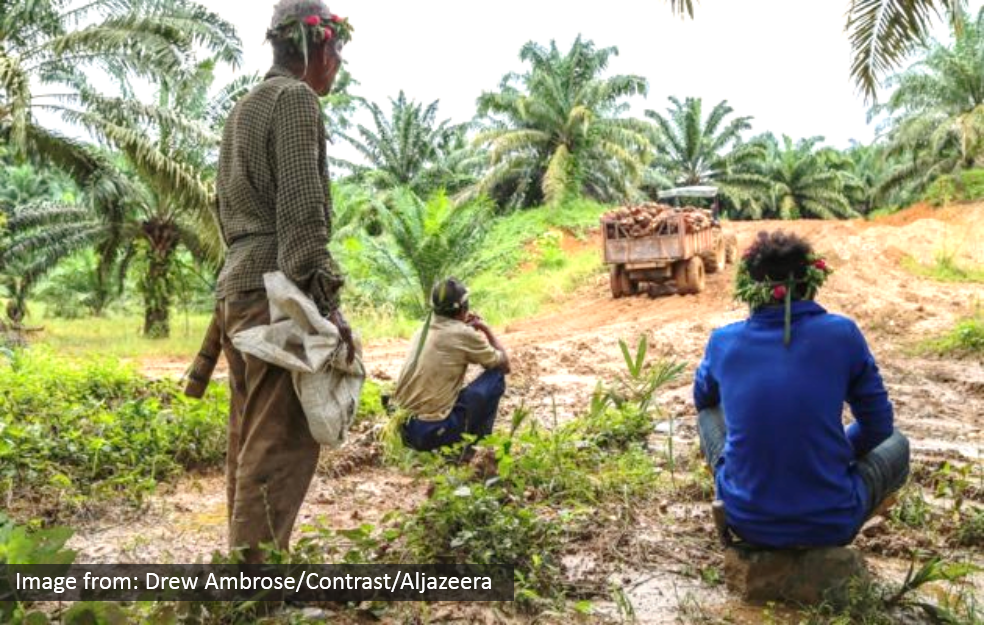 Palm oil used to bring good fortune to the country, but it has also ruined many of the orang asli’s lives. (The second part of Palm Oil series is available here.)

The community most affected by oil palm cultivation is the orang asli.

Back then, orang asli lived in deep jungles. The only way they could survive was to live off resources found in the jungles.

They lived undisturbed for thousands of years, until big corporations came knocking on the forest door.

The loss of customary rights

There are some 140,000 orang asli living in Peninsular Malaysia, and about 80% of them still live in or near forest. They cling to lives in the forests, because the lands, the trees, and the livestock they bring are orang asli’s customary rights.

But much of it have already been churned away to make more rooms for oil palm plantations.

It goes back to ineffective existing laws that could not protect the rights of the orang asli, while global demand is greedily confiscating the lands to plant more trees.

Some of the orang asli stand up for their rights through the help of human right activist groups, but without the regulations to recognise the orang asli’s rights in the first place, it’s hard for them to win the fight.

Protests can only go so far, so all they can do is sit back and watch as their lands are ploughed and turned into oil palm plantations.

Without access to resources in the forests, such as tropical fruits, medicinal herbs, and meat, it changes the course of orang asli’s livelihood. They are denied entry to and harvest on their own properties.

Human right activist groups view the cruel ways of land acquisition – in some cases it involves no due payment and remedy – as a violation of human rights.

Furthermore, for some, the forest used to be a stone’s throw away, but since land clearing, logging, and shifting cultivation have rapidly taken place, the orang asli have to walk farther to reach the forest entrance.

Not only has the barren land deprived them of their sources of life, the remaining forest, which was once used to be rich of wildlife and biodiversity, has also polluted the water source and eroded the soil.

Not all of it is bad, though

Despite all the faults of palm oil, lest people forget that it has also helped to contribute to the better lives of the orang asli.

As many of orang asli’s livelihoods have changed for the worse, some have gone in a completely different direction, with different results.

The world has changed, and a part of the orang asli community has changed, too. They no longer depend solely on the resources in the forest, but have traded petai, herbs, and fish for a more reliable source of living: palm oil farming.

A study conducted in Mukim Ulu Kinta, Ipoh, Perak in 2014 found that involving in oil palm smallholdings generated better income for orang asli farmers and their families. Coupled with seasonal harvests from their own orchards for cash crops such as durian, bananas, and tapioca, the orang asli can live off a more stable income.

Oil palm smallholdings have also helped preserve the wildlife in the forests because the orang asli no longer need to hunt meat for a living. The dependence on forest resources can also be significantly reduced, storing them for the future.

When looking at one perspective, it is obvious that palm oil greatly impacted the lives of orang asli, and not in a good way. But try looking at a different, more pragmatic perspective, not all of it is as bad as people would prefer to believe.

Some orang asli benefit from palm oil, and palm oil can do more if people are willing to give it another chance.

Sadly, people are quick to jump on the bandwagon to hate on palm oil and refusing to see a clearer picture.

Even with the hates from all around the world, palm oil is still the same magical vegetable oil that they once chose to love. One person saw it back then, and by some miracle, maybe his legacy will continue to live on.

(The fourth and final part of this series will be published soon.)