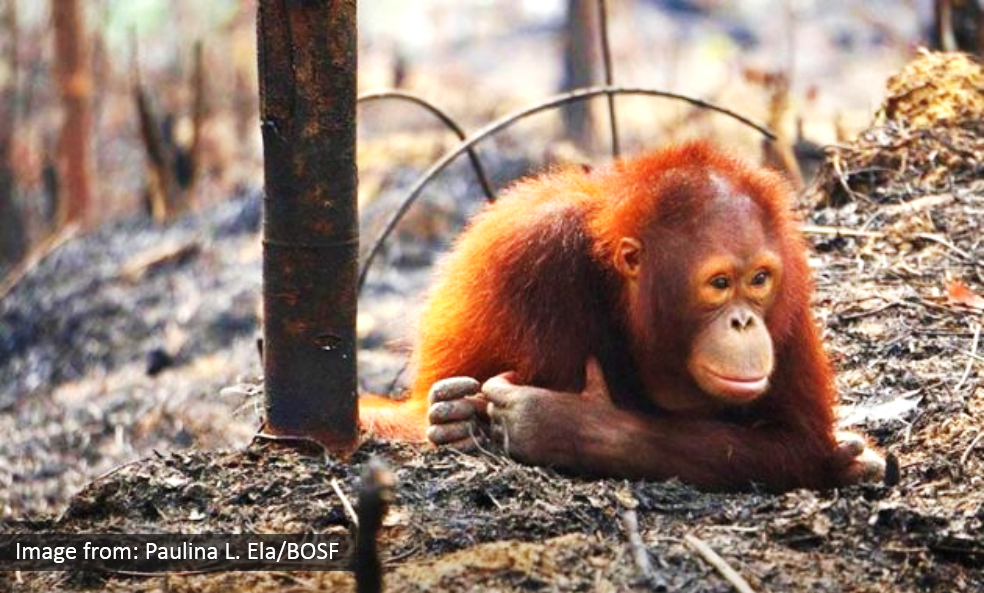 Despite the awes that palm oil has to offer, it also has one evil attribute that could severely harm the environment. (The first part of Palm Oil series is available here.)

When palm oil waste was discovered to be a renewable energy source, people thought it was a clever way to save the planet. But that isn’t the case anymore.

Other than environmentalists claiming biodiesel made of palm oil is the worst type of biofuel because it releases three times the greenhouse gas emissions, another thing the world has come to realise is oil palm is the big bad villain behind the loss of rainforests.

For all the wonders that palm oil has brought to the world, the planet is the one who suffers in silence. Trees are being cut down, sending the animals caught in the way of land clearing scurrying away.

Indonesia, the largest producer of palm oil, has lost more than 31 million hectares of forest to make way for oil palm plantation since 1990.

The number is smaller in Malaysia, with 5.8 million hectares lost to oil palm plantation, but the country also has the highest deforestation rate recorded from 2000 to 2012.

Although oil palm plantation does not contribute to the entire case of deforestation – some occur due to other types of agricultural crop such as soy, as well as logging and urbanisation – but a major part of it does.

Land clearing usually occurs in the densest forests where carbons are generally stored. When the trees are cut down and burned, the stored carbons are released to the outside world. The planet becomes warmer, consequently speeding up the global warming process and leading up to a serious climate change.

Digging into a more bizarre truth, one of the methods used to clear land is the infamous slash-and-burn technique, which typically end up with thick hazardous smoke travelling across regions.

In other words, the world’s thirst for palm oil is what brings the haze disaster to Southeast Asia region every single year. Evidently, the worst case could be traced back to 2015, when Indonesia’s burning forests put the country in the global spotlight and eventually changed the world’s perception about palm oil.

The wildlife suffers a devastating fate

Another catastrophic effect of deforestation is wildlife habitat loss.

Other than oil palm plantation destroying the forests where carbons are stored, it is also where threatened wildlife species, especially orangutans, pygmy elephants, Sumatran rhinos, and clouded leopards, seek shelters from outside dangers.

One of them being rampant poachers who are always on the lookouts for profitable wildlife. In the Wildlife Trafficking series, it was highlighted that elephants, pangolins, and tigers are among the wild animals falling victims to illegal wildlife trades.

It also doesn’t help that Malaysia has a reputation as an international hub for wildlife trafficking.

Oil palm plantations have gradually taken over these poor creatures’ habitats, making them vulnerable to poachers. They are easier to locate, get tangled in snares, or worse, shot.

Take Sumatran rhinos for example, this species has become threatened because of isolation, trapped in the fragmented parts of the forests, never having a chance to mate with their partners for breeding.

In addition, habitat loss also increases the risk for the animals to become extinct. The presence of these animals is crucial for Earth’s biodiversity. Without them, the natural balance of biodiversity will be disrupted.

The sad truth is, in some parts of Malaysia, this already has happened.

Malaysia and Indonesia are home to the world’s remaining orangutans, a wildlife species facing the high risk of extinction. They are the ones who pay the highest price for palm oil production.

Other animals who wander around and accidentally leave the forests normally die within days, either due to loss of primal needs or killed by civilians.

However, not all palm oil production causes deforestation. There is certified sustainable palm oil (CSPO) or palm kernel oil (CSPKO), which according to Green Palm, is defined as palm oil that is grown and certified against the eight Roundtable on Sustainable Palm Oil (RSPO) principles and criteria.

It is to ensure the sustainability and the stability of palm oil adoption in social, environment, and economy.

But out of worldwide palm oil productions, only 17% are sustainable. Meanwhile in Malaysia, only 23% of 5.8 million hectares plantations are Malaysian Sustainable Palm Oil (MSPO) certified.

About 50% of the commonly used daily products contain palm oil, making switching to a different kind of oil almost impossible, and possibly, could cause another form of environmental destruction, though the jury is still out on that one.

The disastrous impact of palm oil does not stop at orangutans losing their homes. It’s true that animals suffer so the palm oil industry could live on, but humans are also the victims.

(The third part of this series will be published soon.)