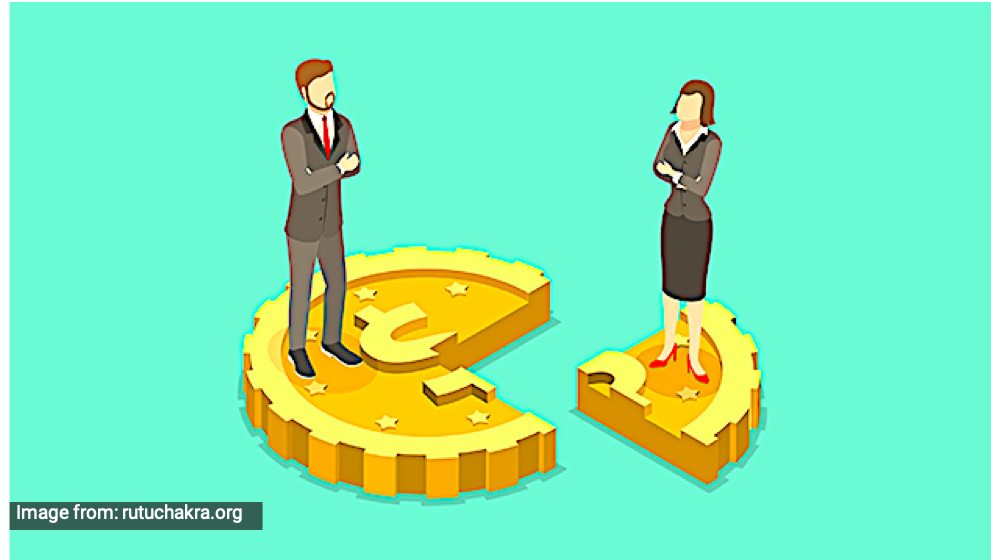 Today, many men and women work in the same field, but that doesn’t mean they get the same pay.

“I’m so sick of running as fast as I can, wondering if I’d get there quicker if I was a man.” – Taylor Swift, The Man

Adele Lim, a Malaysian-born TV series producer, writer, and movie screenwriter, worked hard to give her best for the rom-com blockbuster Crazy Rich Asians. But when she learned that her pay check was 86% lesser than what was earned by her white male co-writer Peter Chiarelli, she turned down the returning role as a writer for CRA sequels offered to her.

Lim refused to be the “soy sauce” in Hollywood – existing to only paint a cultural distinction in a critically-acclaimed film made by a huge money-making production.

She was just one among the many women who have gone and still are going through the same thing.

Some people sweep it under the rug by claiming that the gender pay gap is a myth, and while 79% of men think there is an equal pay between genders, the World Bank reported that between 2011 and 2015 across the world, for every US$100 (about RM450) a man earned, a woman was only paid US$76 (about RM340).

Meanwhile, in Malaysia, Intelligent Money revealed that the average pay gap is at 21%.

Breaking it down into occupations, the pay gap for managers is at 12%. The number doubles for professional positions at 23%, whereas the highest gap goes to skilled agricultural, forestry, livestock, and fishery workers at 31%.

The median and mean monthly salaries have improved for both men and women, but men still earn more.

Past researches on gender pay gap indicate that women are paid less because employers generally perceive them as less productive compared to men.

But in a world where people are fighting against discrimination and promoting equality, these numbers prove that it is still a long journey to reach the ultimate goal.

The first step is the cultural shift

The gender pay gap issue is obstinate, so there needs to be a big cultural shift to actually breach it.

But when they do get hired, another challenge is thrown their way.

Some of them get paid less than their male colleagues. Therefore, the responsibility to improve diversity in the workplace falls into the hands of the employers. Starting from the selection process before hiring, any signs of partiality should be eradicated.

To get the same level of quality from male and female employees, the employers have to implement more meaningful initiatives that could benefit both.

If women get flexible work arrangement for them to easily cater their family needs, men too should be given the same privilege. Only then the pay could be equal, because people should get paid not for being male or female, but for the work performed.

Breaking the stereotype is the next step

According to Cleo, men get paid more not because they ask for it, but because women are too afraid to show that they deserve it.

Women are always told on how to and how not to behave. This traditional way of raising girls has somehow scared them into submissiveness.

Since women had been paid less in the past, they expect less now, so they ask for less, never realising that the action is one of the reasons pay disparity continues to exist.

The fear of being judged as “pushy” has formed a mindset that their hard work will someday be recognised and they will get the pay rise they deserve without having to pursue it.

But that’s not how the world works.

Nowadays, women are becoming more confident in the workplace. Some are even taking on higher roles in the male-dominating fields. This self-reinforcing movement is promising, but it will remain a stagnant effort unless women continue to double the effort to gain recognitions for their contributions.

After Adele Lim turned down the offer to return as a writer for Crazy Rich Asians sequels, Warner Bros. Production went to look for other Asian writers but failed. They went back to Lim for another offer to close the disparity, and co-writer Chiarelli was even willing to split his earnings.

Not all women have to take a page out of Lim’s book, but her story could become a powerful motivation for them to fight the battle of closing the gender pay gap.

Relying on the employers to take notice of their hard work or on the male co-workers’ generosity to give them what they deserve are not the answers.

It is time for women to speak up and stand up for the effort they put into their work, so that the presumption that women will continue to be paid less than men for the next 117 years remains just that – a presumption.