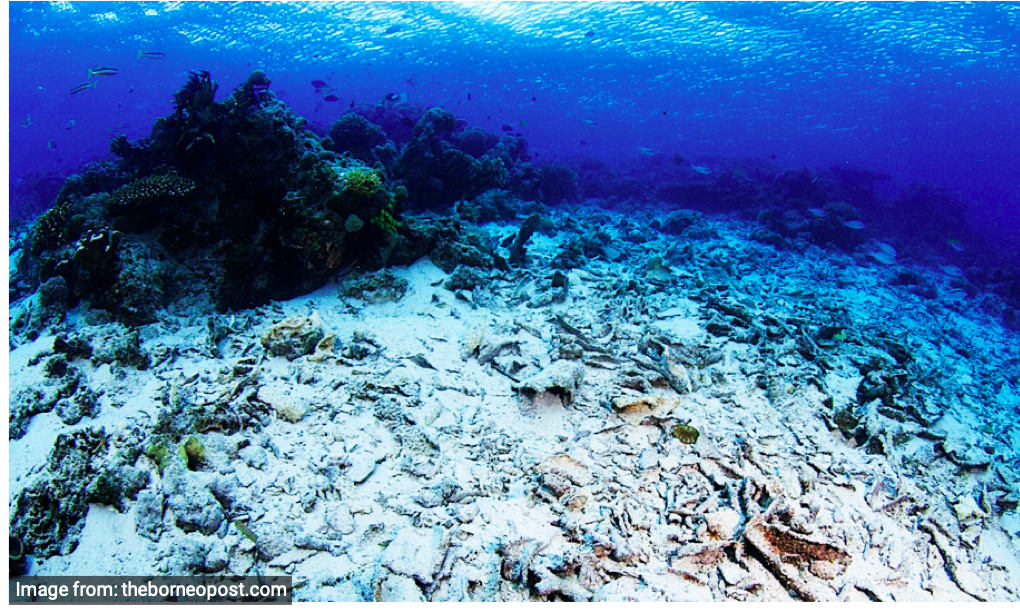 Fish bombing has long existed in Malaysia, especially along the islands of Sabah – a place once regarded as a top tourist attraction because of its beautiful, diverse coral reefs. But that has changed.

Fish bombing or blast fishing is a fishing method that uses homemade explosives which kill or stun fish when they explode. The dead or stunned fishes either float or sink to the bottom of the ocean, allowing fish bombers to collect them.

It is illegal in Malaysia and in many other countries. Not only does the blast kill a large number of fishes which reduces fish population in one shot, it could also damage coral reefs, and potentially put the bombers or nearby divers in danger.

Just recently, two Chinese tourists and a local divemaster were reported dead in a tragic incident believed to have been caused by a fish bombing. Many may think that this was just an unfortunate, isolated case.

But that isn’t the truth.

Fish bombing has been practiced in Sabah for decades and is now a deep-rooted problem in the islands of Borneo, only the injuries or any possible deaths were never reported before due to fear of getting caught by the authorities.

The story of Sabah’s fish bombing was explored in an episode of a documentary channel Unreported World in January last year. Journalist Benjamin Zand went to the island to interview a fish bomber who had to resort to dangerous fishing method to feed his family, and a fisherman whose life was deeply affected by overfishing.

They bombed fish to feed their families

In the Unreported World’s episode, a fish bomber was found living in Labuan Haji, Semporna. His fish bombing activities usually took place in the rich sea such as Dinawan Island, Omadal Island, and Kulapuan Island.

Rich sea is where the sea is full of diverse living corals, which means there are a lot of fish to catch.

The man, along with another three friends, bought homemade bombs for only RM15 per bottle. Looking for the perfect spot while riding on a boat, powdered potassium nitrate, gasoline, and phosphorus from matchsticks all cramped into one beer bottle was thrown into the water and exploded within seconds.

The shock wave from the blast either stunned the fish or ruptured their swim bladders. Some of them floated on the surface, while some sank to the seabed. One of the fish bombers then dove into the water and started collecting the bigger fish, leaving most of the smaller ones behind.

Sadly, the bomb did not only kill the fish but it also damaged the coral reefs.

According to Reef Check Malaysia (RCM), a single bomb can destroy 5 meters diameter of coral reef. In fact, destructive fishing is now one of the main reasons coral reefs all over the world are dying, other than climate change and bleaching events.

The Star reported that 86% of corals in Semporna are on the verge of destruction as a result of fish bombing activities.

Globally, it is estimated that 60% of coral reefs will be critically threatened by 2030.

It is true that some coral reefs grow back naturally after destruction but only with growth rates of 0.3 to 2 centimetres per year. Full recovery may take decades, and time is running out.

The destruction of coral reefs can have significant impacts on the ecosystem. It destroys fish habitat, reduces fish stock, and disrupts the ecosystem balance.

But knowing this does not refrain fish bombers from blast fishing, because it has been their source of income for years.

Many of the sea gypsies (nomadic people who survive living off sea) are considered stateless, meaning they are deprived of a citizen’s rights. No one is helping them, and therefore, they have to continue bombing fish to put food on the table.

It is hard to care about the environment when they have families to feed.

Since one blast could help feed their families for weeks, stopping it altogether could lead to malnutrition and starvation.

On the other side, this is exactly what has been happening to small-scale fishermen whose source of life has been severely damaged because of other people’s fish bombing activities and overfishing.

No more fish for fishermen

Also featured on the Unreported World’s episode was a fisherman living in a poor community on the island of Mabul, south-eastern coast of Sabah. For generations, the island has been home to families from the Bajau Laut clan.

The man lived with his wife and four children. His daily activity was to go diving (self-taught traditional Bajau way of fishing) into the sea to catch fish, but overfishing – be it by the fish bombers or trawlers – had left the ocean bare.

If he managed to catch fish, his family would be able to eat. Otherwise, the whole family would go hungry. In fact, the family had already lost six children due to lack of proper meals.

The fisherman’s story is only one of many.

RCM noted that blast fishing is initially four times more efficient than non-destructive fishing methods. However, after 20 years, income declined to one fifth of what would have been available by sustainable methods. In Sabah particularly, fisheries landings have fallen by 44% in 10 years.

Semporna was once a tourists’ choice for diving because of its colourful and diverse coral reefs. It was comparable to the Great Barrier Reef, and could have even be better if it wasn’t for fish bombing. If this continues, the seabed would soon be an empty wasteland.

Stricter law enforcement alone will not be able to curb this issue. People should be more aware of the existence of fish bombing activities, which are evidently dangerous and fatal, and should be taught to love the environment more.

Think of the next generations, who might no longer be able to eat fish and experience wonderful diving activities because all fish are gone and coral reefs destroyed.

“Ten percent of the big fish still remain. There are still some blue whales. There are still some krill in Antarctica. There are a few oysters in Chesapeake Bay. Half the coral reefs are still in pretty good shape, a jeweled belt around the middle of the planet. There’s still time, but not a lot, to turn things around.” – Sylvia Earle, a marine biologist