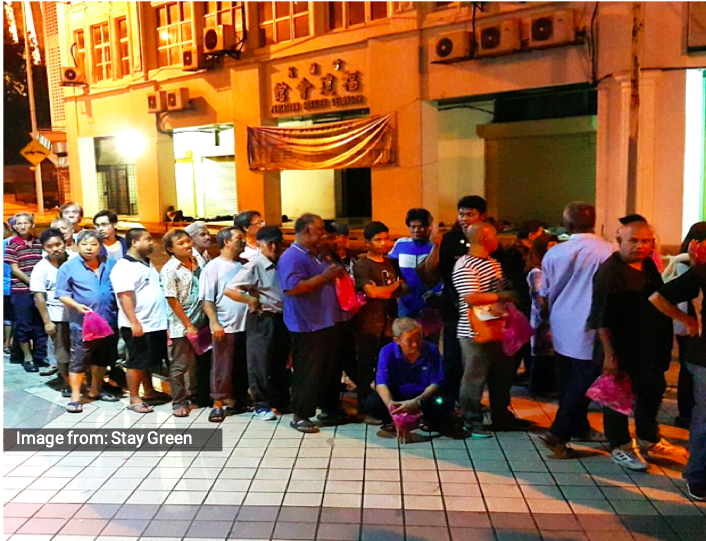 The Homeless face discrimination and unforeseen risks. Their prevalence during Ramadan has resulted in overfeeding and food wastage.

Walking along the streets of the city center sounds dangerous especially when alone. But that fear does not exist in the hearts of the homeless, because the pavements are their beds without shelter.

And without it, they brace themselves from Malaysia’s unpredictable weather. Without food, they gladly accept the offer from the soup kitchens. But without a job, the other perks of living are not an option.

Although these people have a variety of backstories for being where they’re at right now, some are less fortunate than others, and it’s made worse in the eyes of a judgmental society.

According to reports, the unsurprising reason people are homeless is primarily because of unemployment, which led to to them not being able to afford paying rent and eventually ending up being homeless; other reasons are low income, and absence of family care. Other less popular factors include drug abuse, family feud, gambling, and abuse.

Everyone has their side of the story, but what’s more unfortunate is the stigma that fuels their constant unemployment from discriminating employers.

Studies suggest people’s notion about the homeless may actually enforce stereotypes. The findings have stated the homeless are often blamed and judged more severely compared to those who aren’t, and often looked at having a need for mental treatment, although sometimes that isn’t far from the truth.

The media often influences our perception of homeless people, depicting them as beggars or crazy people on the street, which isn’t helping to curb the problem.

From data collected, the Chinese are more prone to being homeless, with the state of Selangor having the highest number of homeless people.

These are especially hard on homeless women, more so if they have children to care for. Research has also shown they’re more stereotyped as prostitutes and bad mothers. Moreover, a lack of income puts the child’s wellbeing at risk, while employment means leaving the child unattended in the streets.

Laying on solid ground at night clearly isn’t comfortable. On top of that, the accompanying health risks are concerning. Some may have become accustomed to their unsheltered surroundings, but their health will visibly decline.

Musculoskeletal disorders and chronic pain, infectious diseases (especially if unvaccinated), and respiratory illness from dirt, and more, are some of the many risks. And without access to medical aid, their illness or infection will likely carry on to others. Although stigmatized, the mental state of these homeless people should be assessed as well.

Certain homeless people live like nomads, spending each of their nights sleeping in various locations. Whereas others are permanently situated at a specific location.

One such location is under the bridges along the Klang River in KL. A majority of them take shelter there, with a chance of being swept away by unsuspecting floods, sometimes losing their personal possessions during the ordeal. These numbers can sometime go above 100 people who alternate between the bridges.

Despite their hardship, these rough sleepers claim they feel like a community when together, constantly helping each other out granting them a sense of belonging. They watched each other’s back during sickness, and sometimes introduce jobs to others who really need it.

Of the listed health risks above, malnourishment is possibly the least of their worries. This was probably greatly attributed by the NGOs (non-governmental organisation) in Malaysia, who are extremely passionate about making sure the homeless don’t get hungry.

After dusk, the many soup kitchens and volunteers gather at designated spots for the homeless to come pick up their food. With packed bread, rice, and a drink, the homeless leave with a sufficiently filled meal of the day. The homeless aren’t spoiled for choice, but multiple organisation visits in a night might be overwhelming.

Ironically, overfeeding the homeless is a problem in Malaysia, and it’s most common during the month of Ramadan. Other than clothing, food is the one of the most important types of aid the NGOs could offer, it tends to lead to an abundance of leftovers from multiple feedings.

Claimed to be a seasonal phenomenon, it happens because Muslims tend to seek more opportunity to do good and help out the less fortunate. Without coordinated planning between different NGOs, every breaking of fast will sadly result in an abundance of wasted food.

Statistically, the highest material waste of Malaysian household is food. And those numbers are able to feed approximately 12 million people a day, with an almost 20 percent increase during festive seasons.

Meanwhile, the number of homeless people are increased by 20 percent during the fasting month, likely due to the food and beverage given by these welfare organisations, with more women and children turning up every night.

But without the help of these NGOs, the homeless would’ve starved to death much sooner. Besides safe shelter, getting these people a job would likely kick-start a path towards a more secure future, which is further proven by studied factors of homelessness.

These street sleepers aren’t here to be well fed and sleep on the streets forever. It is no one’s dream to sleep on the sidewalk as they grow older.

In spite of that, feeding the homeless does bring out a satisfying sense of selflessness for helping the underprivileged. There are always active soup kitchens giving help, but it will always remain a temporary solution until better plans are implemented.