Iman is Malaysia’s only hope for Sumatran rhinos 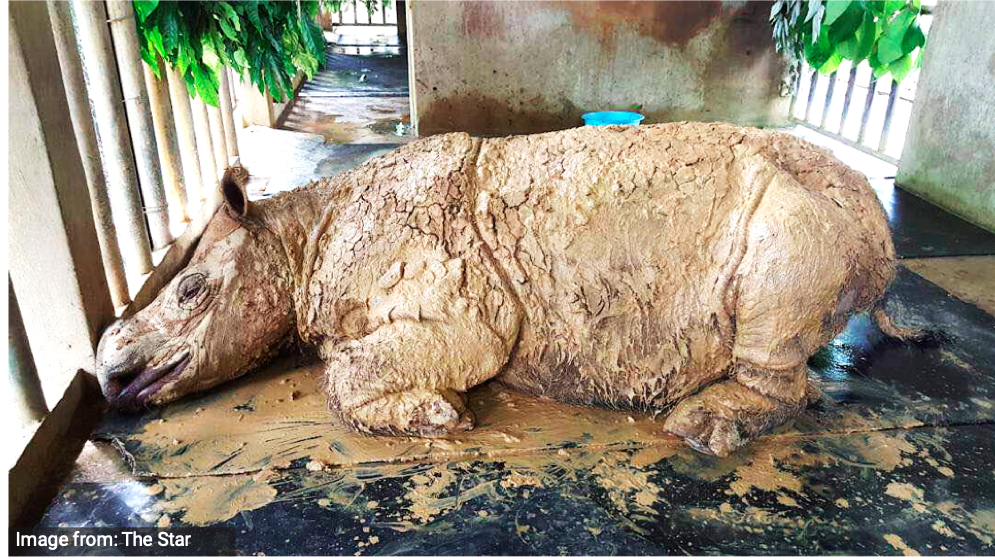 The deceased, fondly known as Tam, succumbed to kidney and liver failures which had been going on for quite some time leading up to his death.

Sabah Tourism, Culture and Environment Minister Datuk Christina Liew also added that Tam’s death could also be caused by old age. However, the real cause of death will only be determined after an autopsy is carried out.

Although the death of Tam has been devastating, especially to his caretakers during his time in the wildlife reserve, Liew is positive that Tam could still contribute his genes to the preservation of the species.

While poaching and habitat loss being the usual threats for a wildlife, the biggest one for Sumatran rhinos is isolation.

Being in isolation in the fragmented wild of Sumatra and Borneo, it is hard for this species to find partners to mate. The longer a female rhino goes without mating, the less their chances to get pregnant. The ones that do mate, have already exceeded their fertile phase, hence, no successful breeding.

When the death rate is higher than the birth rate, the number of Sumatran rhinos keeps declining until there are only around 80 of them left in the wild, clinging to life and in dire need of rescue.

The fact that Sumatran rhinos are slow breeders has also made things a lot worse.

In Malaysia particularly, this species was declared extinct in the wild last month after surveys found no sightings and footprints of the rhinos in Lahat Datu, Sabah.

The only surviving rhinos were the precious trio: Tam, Puntung, and Iman.

The tales of the three surviving rhinos

Tam (short for Kertam) was discovered while poking around at an oil palm plantation in 2008 and was rescued. After a week of being fed and befriended by Sabah Wildlife Department staff, NGO Borneo Rhino Alliance (BORA), and WWF-Malaysia, he was then transferred to Tabin Wildlife Reserve, Sabah.

Tam was estimated to age around 20 years old and was put under the care of his specialized caretakers.

Efforts to preserve the remaining Sumatran rhinos with a breeding program were put on hold for a short time, until a female rhino was captured by the joint operation between BORA and the Sabah Wildlife Department in 2010.

The rhino was named Puntung (stub in English) after her crippled left foot believed to have been lost to a hunter’s snare when she was young. The 25 year-old Puntung then became a mate for Tam.

Tam and Puntung were put in adjacent paddocks where they could see each other and communicate as a way for captive breeding program, among others, but to no avail.

Things got more complicated when Puntung fell ill to what was thought as a life-threatening dental infection, but turned out to be more serious and fatal squamous cell cancer.

After a brief battle against the incurable cancer, Puntung reached a point where she could neither breathe through her nostrils nor vocalize. In the end, a difficult decision was made. Puntung, in pain, was finally euthanized on June 15, 2017.

The two remaining rhinos, Tam and Iman, were the last hope of preserving the critically endangered species.

Iman, another female rhino, was rescued from Danum Valley in 2014 by wildlife conservationists. She was thought to be the perfect mate for Tam, next to Puntung.

However, nature fought back. Just as a female rhino who goes too long without mating reduces her chances of getting pregnant, the same rhino could easily develop cysts in her uterus.

As a result, Iman was not able to carry pregnancies despite still producing eggs.

As an alternative, the department extracted the genes from Tam and harvested Iman’s eggs for in-vitro fertilisation (IVF). Sadly, none of the attempt for breeding ever succeeded.

All hope was dashed when Tam died on May 27.

A desperate call for help to Indonesia

Since 2015, BORA had desperately striven to get Indonesia to send a male rhino’s frozen semen sample for preservation. However, the requests had often been ignored.

Malaysia was ready to put aside any differences it might have had with Indonesia in the past, such as cultural appropriation and territorial claims. The priority should be focused on saving the rhinos.

Last year, Indonesia hinted that it might finally be sending the much-needed semen sample. In return, Malaysia agreed to let Indonesia keep any resultant offspring, should the IVF between Iman’s eggs and Indonesia first captive-bred Andalas’ sperms succeed.

But the deal fell through due to technical reasons, and the fact that Iman was unable to produce any viable eggs.

BORA’s Executive Director Datuk Dr John Payne said his team had been working on the deal for so long and Indonesia had always had some reasoning to not cooperate.

Now, following Tam’s death, Malaysia is once again seeking the help from Indonesia. BORA still believes that Sumatran rhinos can be saved from the brink of extinction and will keep persistently asking until Indonesia agrees.

However, at this point, with Iman’s health condition rapidly deteriorating, the rhinos could actually be extinct in Malaysia before any helps arrive.