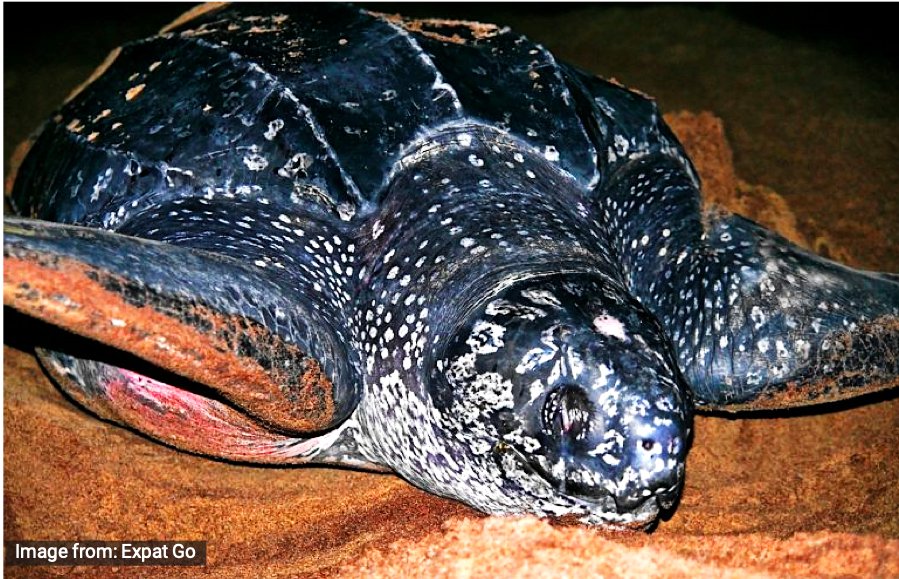 There used to be 10,000 nesting sites hiding under the steep slopes of Rantau Abang beach sand in the 50s. However, by the end of the 90s, barely any nesting sites were left. No thanks to the aggressive human involvement.

Like all travelers who return home when a trip ends, leatherback turtles also swim to the shore after years of living in the pelagic habitats and crawl back to the place they were hatched about 16 years ago to lay their eggs.

When a leatherback nests, the number of eggs could be up to more than 100. But not all of these eggs are viable to hatch. Some unlucky eggs might not have yolk to develop into an embryo.

The ones that do, however, have to go through a tough journey to make it to the ocean.

10% will normally be the victims of seabirds, crabs and other reptiles and mammals on the beach, 25% typically survive their first few days in the ocean, and just 6% make it through their first year.

While the males remain at sea, the females swim back ashore after they reach maturity for nesting. The time gap between nesting seasons is usually around three to four years.

Humans and their deplorable behaviors

Watching a leatherback laying eggs used to be a mesmerizing sight to behold, but sometimes having fun can go a little bit extreme.

In the early days when there used to be no rangers to monitor the beach in Rantau Abang, local tourists were seen riding these poor creatures for joy, flashing lights right into their eyes, and playing with their flippers as a terrible joke.

Turtle eggs, although unproven to be as nutritional as some people claim them to be, were heavily poached. The egg collectors wandered around the beach looking for nesting sites, stole the eggs, and sold them in the markets for a lucrative income.

Also regarded as “aphrodisiac”, the eggs were consumed unapologetically by the tourists who chose Rantau Abang as a trip destination. The eggs were said to taste more flavorful than chicken eggs with a “musky” aftertaste.

Urges by WWF-Malaysia for the tourists to stop selling and consuming turtle eggs were somehow neglected by the ignoramuses.

On top of that, campaigns were also launched by several other NGOs such as Turtle Conservation Society (TCS) to raise awareness about preserving the turtles and help the less educated people to learn that consuming the eggs contribute to the decline in turtle numbers and thus, extinction.

Another human activity that contributed to the extinction of leatherbacks is fishing. Sometimes, while swimming, they were entangled in the fishing gear and struggled to survive on their own.

Malaysia is now rated as one of the world’s worst for plastic pollution. For the worse, this country has also become the place for others to blindly dump their plastic waste.

Some of this waste are burnt, a small portion recycled, and a major are left for hundreds of years. This would eventually make its way into the ocean and cross the pelagic habitats of the turtles.

Mistakenly thought of the plastic as jellyfish, the turtles would end up eating it. As a result, they die at sea and none comes back ashore for nesting.

Turtle and Marine Ecosystem Centre (TUMEC), a sanctuary and hatchery, was set up in Rantau Abang as an effort to preserve the lives of the turtles.

Sadly, not much can be done these days because leatherbacks are now gone. The only leatherbacks that can be seen are the stuff exhibits at the Turtle Information Centre.

When people decide to visit Terengganu, it’s mostly because of the beautiful beaches surrounding the state coastal line. The influx of tourists leads to more accommodations built, such as resorts and motels.

It’s ironic when the accommodations built to serve the tourists are the very same reasons the main source of attraction cease to exist.

The turtle offspring that hatch sometimes become attracted to the lights shone from the resorts near the beach, causing them to crawl towards the lights and away from the sea. Therefore, less young turtles survive their early years.

When leatherbacks can no longer be sighted in Rantau Abang, it has caused the number of tourists to decline. As a result, resorts and motels suffered.