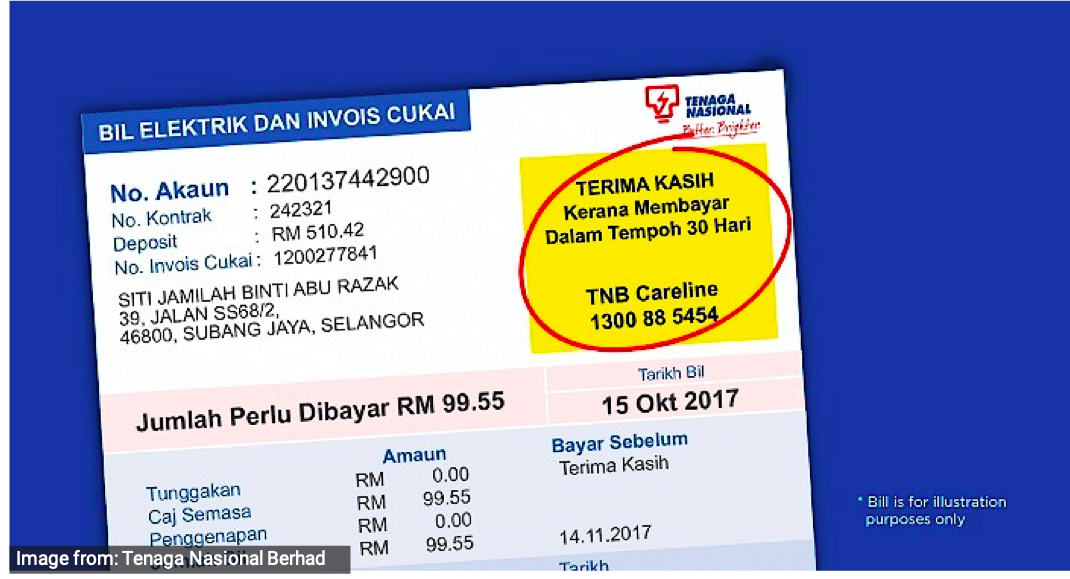 Malaysia’s electricity charges are among the lowest in the world. Even so, our environment pays the price. While Malaysians save electricity for monetary reasons, better knowledge about energy efficiency should be applied.

As people leave their homes, everyone adopted the habit of turning off the lights to save on electricity. But most ignore the state of other plugged electrical appliances.

When the bills arrive, people may contemplate on its price and legitimacy. Bills are paid, but its true details are often looked over. With a little insight to how electricity utilization charged, perhaps people could change the way they use appliances and lower monthly bill charges.

Breaking down every Watt into cents

Electricity production is handled by different utility companies in the Peninsular and East Malaysia. While TNB (Tenaga National Berhad) supplies to the west, Sabah Electricity, and Sarawak Energy supplies to their respective state. Each equipped with their own power plants and tariffs.

Calculating every item’s electrical consumption may be tedious, but it’s a pretty informative way of efficiently controlling its utilization. The formula goes as such: (total kilowatts an item needs) X (number of hours the item has been in use) X (cost per kilowatt per hour mentioned in the tariff).

When comparing domestic tariff, TNB’s tariff for domestic use are as below as of 1 January 2018.

According to TNB, the tariffs are adjusted every six months by using ICPT (Imbalance Cost Pass Through) system to determine if surcharges or rebates are required to alter the base price in those six months. Currently, the base tariff is set at 39.45 cent per kWh (kilowatt per hour).

As for Sabah and Sarawak, the domestic tariff rates are slightly lower than west Malaysia.

If those charges look expensive for a fridge, keep in mind Malaysians’ electricity bill is already one of the cheapest in the world.

Last year, Malaysia was reported as charging the fourth lowest domestic electricity tariff in the world, right behind Sweden, China, and Taiwan. It was probably a feat Malaysians wouldn’t have imagined. The report credits efficient resource management, foreign investors in energy sectors, and low interest rates contributing to the claim.

Below is a comparison of the electric company charges in Asia.

There are many energy saving methods out there, but there are more energy wasting habits.

Contrary to popular belief, plugging in chargers even when turned off consumes a slight amount of electricity. Appliances in these states are termed “vampire power”, whereby appliances gradually leech energy when in standby mode or phantom load. This heavily applies for smart televisions, computers, and could contribute 10 percent more to the bill.

A myth about turning the lights on and off repeatedly will consume more energy is false. Although it is true that turning it on produces a surge of energy, the amount doesn’t exceed the amount need to let the light stay lit.

A major alternative solution to effectively save energy in homes, and the environment, may be utilization of solar panels. But in reality, the installation itslef cost an arm and leg for its installation itself.

The solar panel system installation can heftily cost anywhere between RM 45,000 to RM 100,000 depending on the type of tech used, which isn’t cheap. On the bright side, SEDA (Sustainable Energy Development Authority) of Malaysia will pay a home as much as RM700 every month for additional electricity stored (4kW).

According to calculations, it takes 7 years for the invested money through this renewable energy to return. But after those 7 years, a home could generate as much as RM 6,800 per year.

Unless these solar panels are subsidised by the government, it’s unlikely the masses will utilize it with the price tag it carries now. Presently, it’s a long-term investment plan only those with deep pockets could afford. But this may be a good solution for corporations and commercial buildings which could afford such technology.

Our homes are lit at a price

Malaysia’s main source of electrical power is derived from thermal energy, which branches out to three main fossil fuels which are oil, coal, and natural gases. Out of all the fossil fuels, natural gases are significantly higher than its counterparts.

As for electrical demands in Malaysia, the industrial sector consumes 45 percent of the power output, followed by 33 percent consumption by residents, and 21 percent from commercial use.

The cost of construction and time spent on these power plants weren’t the only price paid for getting electricity. Where men build, environmental destruction followed.

Although hydroelectric dams are non-polluting renewable energy source, Their construction severely impacts the landscape of forests and rivers. By changing the habitat of wildlife, agriculture, and water temperature, it disrupts food chains and natural growth.

Monetary reasons always came first when we think about saving electricity. But from a different perspective, saving electricity contributes to saving the environment. Perhaps people can embrace it on top of reducing their electrical charges. After all, energy conserved is life preserved.