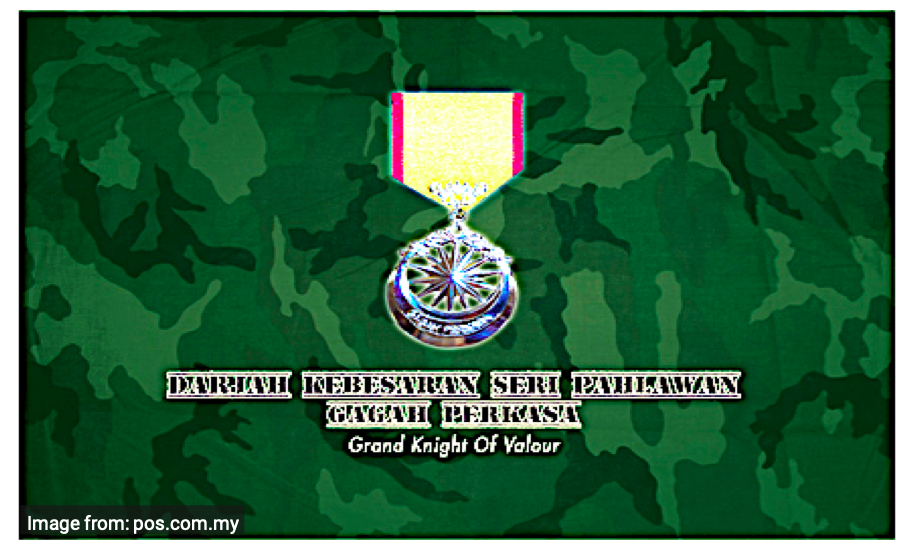 Darjah Kebesaran Seri Pahlawan Gagah Perkasa is for the brave people who fought for the welfare of the country and they deserve all the thanks.

Almost anybody can get a title in Malaysia, whether it is hereditary or conferred as Federal or State Awards.

From Datuk or Dato’, stepping up to Tan Sri, and limited to Tun, they all sound familiar to people’s ears.

But not many people know of the existence of the honorific for Malaysian war heroes, the one that outranks even those with a Tun preceding their names.

The recipients of the award may be invisible, but they are the ones who kept people safe when push came to shove.

More than just a ‘thank you’

Darjah Kebesaran Seri Pahlawan Gagah Perkasa or the Grand Knight of Valour is an honour granted to Malaysians who have shown “supreme courage and bravery in extraordinary and highly dangerous situations”.

But instead of carrying a title in front of the name to be paraded around, the recipient gets a silver medal pendant in the shape of a crescent moon with the inscription Gagah Perkasa. Fourteen-pointed star is embedded inside the arc of the moon, and a specifically designed clasp attaches the pendant to a 1.5-inch wide of royal yellow ribbon with red stripes of 1/8 inches wide on both sides.

Living recipients receives an allowance of RM 400 per month, and ends upon their death.

Unlike the limit of only 35 Tuns at one time, The Grand Knight of Valour awards are not limited, and may be conferred to any eligible person, both civilian and military as long as that person fits the criteria.

The award is the nation’s way of saying thank you for the knights’ services and sacrifices.

But how many Malaysians know of the recipients and their stories, or at least know that the award exists?

They are our heroes

Psychological Today defines heroism as “the willingness to make a personal sacrifice for the benefit of others” and nobility as “those who serve others at a cost to themselves”.

But as most people are led to believe, a hero is someone who emerges as a result of some catastrophe or comes from a different planet with superpowers and the will to save the world. This is what they see in the movies and they end up overlooking the real heroes who served for the benefit of their own country.

Giving people his all by putting himself at great risks is what makes a person heroic, just like the recipients of the Grand Knight of Valour.

Since Special Constable Veloo Rajavelu gave his life in the combat against piracy in Klang in 1962 and was awarded the first Grand Knight of Valour in 1963, the rest that came after him were as heroic as he was, if not more.

Warrant Officer 2 Lenggu anak China (1971) died alongside the enemies he single-handedly killed although being outnumbered during an assault, Captain Hamid bin Awang (1973) led the attack on a force of 40 to 50 communist terrorists with a M79 grenade launcher, and Corporal Narendran Shanmugam or The Protector (1984) fought a group of terrorist during an explosives escort while sustaining a near fatal knife wound to the chest.

These people, along with the other 27 recipients, were the ones who fought the enemies bravely so that others could sleep safely and soundly at night. They were and are the real heroes who greatly contributed to the nation.

However, unlike celebrities seen receiving awards on TV and celebrated with grand events and appraised gracefully, these heroes return home after a daring mission and appear as an average civilian. Their sacrifices go unnoticed because no one actually acknowledges it.

But not all heroes make it home, and the ones that didn’t, were never heard of again.

This, of course, has to change. Instead of glorifying the less credible people, the brave knights are more deserving, whether they are still alive or otherwise.

Remembering the living and the fallen

Children look up to heroes because they teach them the rights and the wrongs. In this context, heroes can be parents, caretakers, and teachers.

Therefore, by exposing and sharing the stories of the forgotten valours (the ones that are not in the History textbook), these children whose minds are developing and impressionable could learn to nurture their values for the future.

Their identities are better shaped, and the battlefield stories could inspire them to overcome adversities they might face later in life.

It is important for the adults too, because the past actions could be emulated and commemorated for a better future. Knowing the stories makes it easier for them to pass them down to the kids and they will grow up more enlightened.

Civil society movements such as protecting the environment and saving the nation’s heritage are great progresses, and it wouldn’t hurt to add remembering the fallen warriors to the list.

If it isn’t just for the sake to better humanity, remembering could simply mean respecting, and the awarded valour most of all, the living and the fallen, truly deserve it.