Seeking thrills on the busy road 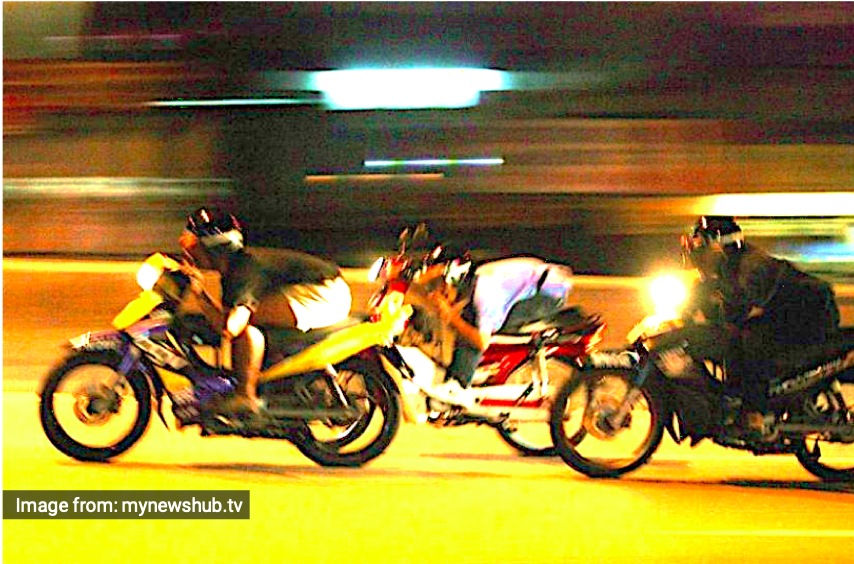 In Malaysia, there is a peculiar view on the street in the middle of the night – a group of motorcyclists gathering while making noises through revving engines, waiting for a race to start. They are the mat rempit, and they have built their own culture in the country.

Two tourists decided to take a night walk around the historical Dataran Merdeka. The first few minutes were spent with joy as they captured the KL night life, but the situation soon changed when a group of motorcyclists began to arrive.

The ramping of the throttles, the noisier than normal exhausts, and the cheers from the youngsters grew louder as the motorcyclists began showing off their stunts to the unimpressed crowd.

The two tourists were unlucky, getting caught in the middle of a weekly street race. So were the other cars stuck on the same road, because moving meant crashing the motorcycles circling around them.

But the motorists didn’t seem to care.

They were seeking sensations, and watching people flinch at the sights of their bold stunts gave them just that.

They call themselves mat rempit, and they have formed their own place in the country though with little to no acceptance from the citizens.

The word mat is a Malay slang often refers to male persons of Malay descent, while the word rempit comes from the phrase “ramp it”, which means “ramp the throttle” as hard as a rider could.

Together, they make the term mat rempit – a group of individuals involved in illegal street racings whose main transport are motorcycles.

When it comes to mat rempit, everything associated with it is either derogatory or immoral. They gather around on a chosen track in the middle of the night, cause public nuisance, and put their lives and the lives of others in danger.

Mat rempit is a common sight in Malaysia, even known as the “mat rempit culture”, and it has become the subject of many local movies such as KL Menjerit, Bohsia Jangan Pilih Jalan Hitam, and Remp-It – none of them were portrayed in positive light.

Remp-It, which was directed by Ahmad Idham starring Farid Kamil, found its way to the big screen in 2006. The film was as close as it gets to picturing the life of a mat rempit.

As depicted in the movie, living the life of a mat rempit is full of risks and perils, but those are the things that set their adrenaline pumping.

They do stunts for fun, such as the wheelie (riding on one wheel), superman (lying flat on the seat), and scorpion (standing on the seat on one leg during a wheelie).

Extensively modified Honda EX-5, Yamaha Y125X, and Yamaha RX-Z, or simply known to locals as “motor kapchai” are the common choices of motorcycle among mat rempits. Some own these by stealing, others avoid paying road taxes.

The big crowd and the loud sound often scare people off the street, as if the mat rempits own the place.

Sunday nights are the best time for mat rempits to hold an illegal race in Kuala Lumpur, along with Saturday and Friday nights and occasionally on weeknights, especially on Jalan Sultan lsmail, Jalan Ipoh, Chow Kit, and the Federal Highway.

But it doesn’t stop there. Mat rempits exist all over Malaysia.

Jalan Pasir Puteh, Perak, Sungai Lurus, Johor, and Jalan Kuala Terengganu-Kuantan are where mat rempits have been reportedly arrested before, proving that the mat rempit culture travels across Malaysia and is pulling many teenagers into its trap.

There is something about racing on the public tracks – the mat rempits can show off their kamikaze skills on the road to the people watching, while riding on the hillside road with sharp turns is challenging, giving them the thrilling surge that they seek.

According to a former mat rempit, the racers are attention seekers and they like having people see their performances. This is why racing on actual tracks or on a blocked road does not give them the same level of excitement.

Races are normally organised through illegal betting, and in some cases gangs are provoked into racing by other gangs simply by doing stunts on the road. Cash, and in some cases, women are promised to those who win.

The situation gets rowdier when the races are organised following a special occasion, for example during Eid and New Year celebration, as well as on the night of the Independence Day.

Heavy crackdowns by the authorities in the past decades have scared many mat rempit gangs into retirement, but hundreds are still tempting fate every Sunday night.

It’s like fighting a losing battle, but there is still a possible cure to this plague – educate the youngsters of the futureless life of becoming a mat rempit, before spinning bicycle for fun graduates into “rempit” motorcycle for cheap thrills.