Days of traditional games are vanishing 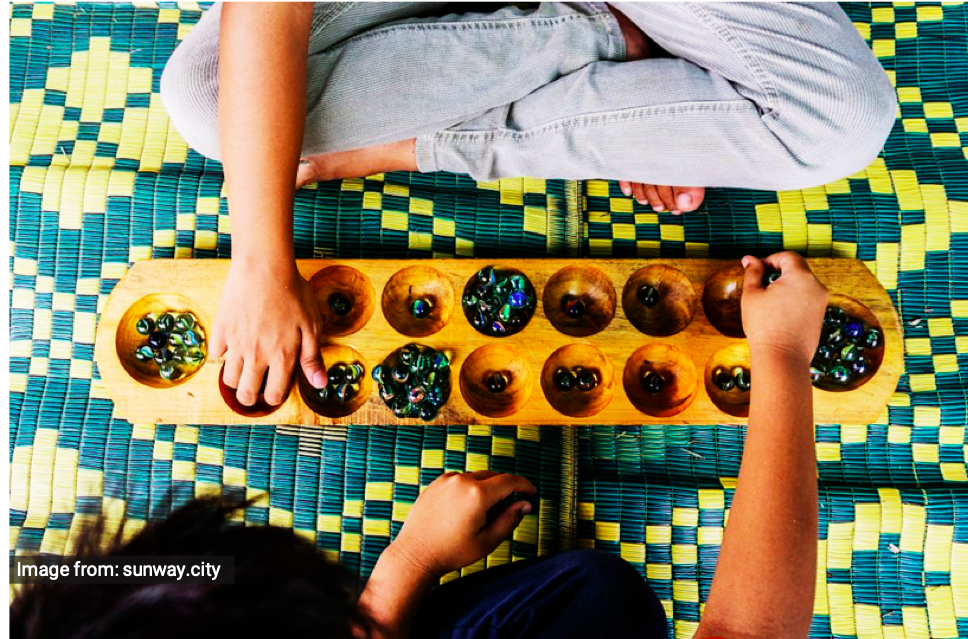 Before PlayStation and smartphones took over childhood, most Malaysians grew up playing traditional games. No electronics or Wi-Fi signal needed, just a group of friends, ubiquitous instruments, and tons of fun.

Congkak (a game of two players taking turns in getting the most tokens in the storehouse using wooden board), batu seremban (throwing, flipping, and catching five stones), and baling selipar (throwing slipper over a stack of slippers) were once a colourful evening experience with the classmates after school or with the kids next door during the weekends.

Waiting to be picked up from school could be long and boring, but the games of pepsi cola (taking turns in stepping on others’ shoes and dirtying them), chup tiang (claiming one post out of rows of posts), and gasing (spinning top and winning the game) helped to occupy the time.

Traditional games were diverse throughout the country. While the people in the east coast went to the windy fields to fly their wau (kites) high in the sky and compete against each other, others prefer to engage in the game of nenek si bongkok tiga (blindfolded “grandmother” looking for her grandchild), fire and ice (catching and tagging), and lompat getah (jumping over long rubber rope).

Not only did these games teach the players how to creatively craft a strategy in order to win, they also enhanced the social interaction between children. Friendships were strengthen when they played in the same team, and the sportsmanship was sharpened the more they played.

But those days are almost gone now, swallowed by the rapid globalization the country is moving towards.

The games are not passed down to younger generations

The young are now mostly clueless when it comes traditional games. When there are more fancy video games on screen, no one wants to step outside for an evening of teng-teng.

However, of all the positive life changes that technology brings, it could also have one big negative impact on child development. Look no further than a close family, there has to be at least one parent equipping his or her adolescent child with a smartphone.

Parents are not able to sit down and teach their children how to play sorok-sorok (hide and seek) or engage in masak-masak (pretend cooking) due to busy schedules. Never mind the fact that technology could limit children’ social interaction and affect the way they think and feel – less focus and superficially process information – parents hand their mobile phones over to the children so that they could invest more energy juggling work and other adult responsibilities.

A research by Common Sense found that the screen time of children in the US increase from year to year, with average 48 minutes a day in 2017.

With an easy access to the internet, a child can simply download and install a mobile game on the smartphone or watch entertaining videos such as Didi & Friends, Upin & Ipin, and Omar & Hana on YouTube.

Children playing outside of the house is a rare sight in this digital age and traditional games are no longer the options for them to have fun.

Museums all over Malaysia take part in the preservation of traditional games. However, the presentation is mediocre at best as many more fun games are missing from the exhibitions.

The Pahang state museum, for example, only exhibits four traditional games: wau, congkak, gasing, and hencang buah keras. While these games might be popular in Pahang in the past, adding more games to the exhibition could help the youngsters to learn more of the country’s heritage.

In addition, Museum of Traditional Games in Kuala Selangor may look promising on the surface, but lacking in terms of the game illustration and showcases.

On a slightly positive note, the Negeri Sembilan state museum organized a month-long traditional game exhibition in 2007. It also held competitions for sepak raga bulatan, galah panjang, and tarik upih. The same event was held by National Museum in 2009 to introduce the joy of traditional games and the past heritage of Malaysia to the youth.

However, while the competitions were able to instill interest among younger generations to keep the traditional games alive, no further exhibition has been organized ever since.

Museums should play a vital role in preserving cultural heritage for the future generations. Although reports show 3,181,012 people visited 20 museums (authorized by Jabatan Muzium Malaysia) in 2017, there should be a special division reserved only for traditional games so that the effects could be enduring and long-lived.

Other than globalization, migration, demographic, and societal changes are also contributing to the disappearance of traditional games. Museums alone cannot survive in this growing digital age; Therefore, more preservation efforts are needed to ensure that traditional games will not be gone.

One of the ways of preservation suggested during The Art Summit “Protection and Inheritance of Traditional Games in the Internet Era” (organized by China’s IT company Tencent and the Chinese National Academy of Arts) is to raise awareness about cultural heritage among young people. In order to do this, collaborations from local communities, government, national and international institutions and stakeholders through formal and non-formal educations are required.

Should the efforts fail, perhaps in the future, the only way to see a congkak board is through a photo in a museum gallery, just like the polar bears and Malayan Tiger.