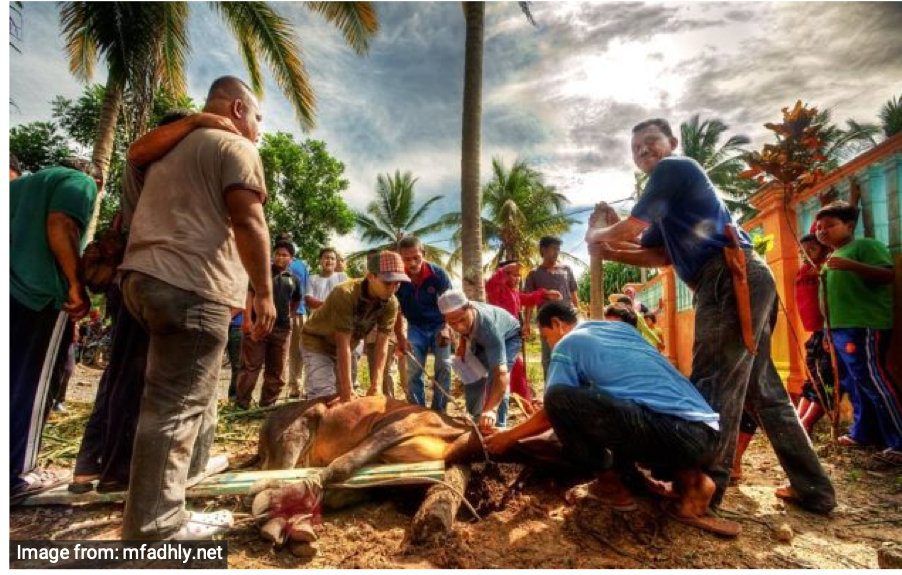 Aidiladha celebrations has never been as grand and food-centric as Aidilfitri. Are Malaysian Muslims less appreciative of the Festival of the Sacrifice?

A few months before Aidilfitri, most people are seen buying fabrics to be sent to the tailors to make a new pair of baju kurung and baju Melayu, while some choose to buy ready-to-wear pairs at least a month before, complete with a new set of curtains and furniture to celebrate the blessed day.

But the same is not seen during Aidiladha.

Although the festival also begins with takbir and an early morning congregational prayer at the mosque, the events leading up to the day and after it are completely different.

Aildilfitri witnesses thousands of cars lining up on the highways – people going back home to celebrate hari raya with their loved ones. The tradition of giving duit raya is lively, and open house invitations are endless throughout the whole month of Syawal.

Preparations for Aidiladha however are less festive, other than looking for or purchasing four-legged animals for the sacrifice. Not everyone goes back home, and some even spend the day casually like any other days. A new baju raya is also not needed, recycling the same pair bought earlier for Aidilfitri is enough.

Aidiladha celebration is believed to be merrier in conservative Kelantan and Terengganu, in contrast to the urban areas.

The appreciation shown for Aidiladha is obviously lacking if compared to the one poured over Aidilfitri.

Forgetting the true meaning of Aidiladha

Both festivals are celebrated as a part of completing the rukun Islam (five pillars of Islam): fasting in Ramadan and performing Hajj pilgrimage for those who could afford it.

But actions and gestures put Aidilfitri on a much higher place compared to Aidiladha.

Aidilfitri is hari kemenangan (the “winning day”) for Muslims to show their gratefulness to Allah s.w.t. for the blessing that is Ramadan, and Aidiladha is the day of remembrance of Prophet Ibrahim’s noble sacrifice.

The story of Prophet Ibrahim a.s. sacrificing his son Ismail who soon became a prophet himself is widely known, but perhaps not many truly understand its significance.

Prophet Ibrahim’s unshakable belief in Allah s.w.t. was greatly tested when he was asked to sacrifice his own son, the son he waited for years to have. However, his faith remained strong despite the constant incitements from iblis (the devil).

But the story didn’t start and stop there.

When Prophet Ismail was a newborn baby, Prophet Ibrahim was tasked with leaving his wife Siti Hajar and Prophet Ismail in Mecca, which at the time was nothing more than a desert with no food and water. Siti Hajar ran back and forth between two hills, Safa and Marwa, looking for water to feed her son.

In addition to this, Prophet Ibrahim and his son were the ones who built the Holy Kaaba, where Muslims go to perform the fifth pillar of Islam.

The celebration of Aidiladha marks the end of the pilgrimage, where Hajar’s sacrifice between Safa and Marwa is commemorated as one of the rituals in Hajj and Umrah.

Therefore, celebrating Aidiladha by sacrificing animals is not just for Prophet Ibrahim himself, but the sacrifices of his entire family. Their unwavering faith reflects the true meaning of being a Muslim, and Aidiladha gives hope that anyone can reach that high level of contentment.

In front of Kaaba, every Muslim is one and the same no matter how good, rich, or sinful they are. Aidiladha reminds them of this, and strengthens the persaudaraan (brotherhood) among Muslims.

But if one decides not to perform the sacrifice because of the lack of understanding of the underlying message, then the spirit of celebrating Aidiladha will simply be absent.

The duration to perform the encouraged religious duty, which is sacrificing animals, is longer with these four days. Takbir can also be recited for four nights straight, and the sacrificed meat can be distributed to the poor and deserving people.

But sacrificing animals such as cows, goats, and camels is not a compulsory religious duty unlike fasting in Ramadan. Thus, many people overlook the true meaning of Aidiladha when they decide not to perform the sacrifice and let the day go to waste.

The reality is, animals are not the only thing that can be sacrificed on Aidiladha. The word ‘sacrifice’ (korban) goes beyond slaughtering cows and lambs.

Leaving sinful behaviours and routines to become a better Muslim truly and sincerely only for Allah s.w.t., giving money as charity for the sake of others’ happiness, and spending precious time and energy for ibadah (any acts of worship) also reflect the true meaning of Aidiladha.

In fact, sacrificing the things that keep Muslims away from Allah s.w.t. should not be a practice only during Aidiladha, but throughout life as long as one wishes to be granted access to Heaven.

People can be forgetful, especially since Aidiladha is celebrated only once a year. Although they remember Prophet Ibrahim and his sacrifice, the message behind it withers from time to time, hence Aidiladha becomes another celebration without meaning.

While it is true that Aidiladha is the second most important celebration in Islam after Aidilfitri, appreciating it for its beautiful sentiment can bring more than just contentment.